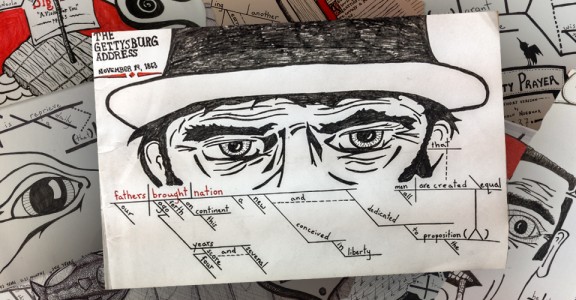 Doodles, Diagrams, and Good Books is a 150-page adult activity book that is designed to entertain and inform. For the publisher, the key element is this: it must be printed on paper. This ain’t no ebook.

Eye Candy for All

This book will present readers with the first sentences or lines from the greatest and most loved works of literature in the form of whimsical illustrations and grammatically correct, hand-drawn diagrams.

Experience your most treasured literary memories parsed into elegant grammatical diagrams and accompanied by stark illustrations. 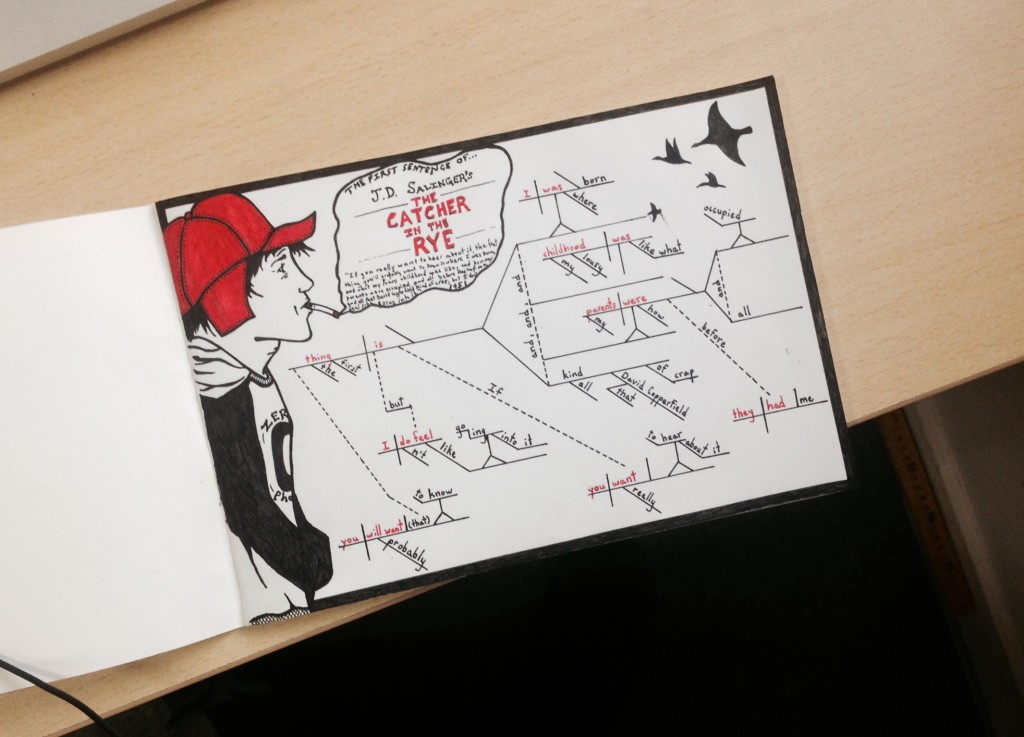 J. D. Salinger’s THE CATCHER IN THE RYE 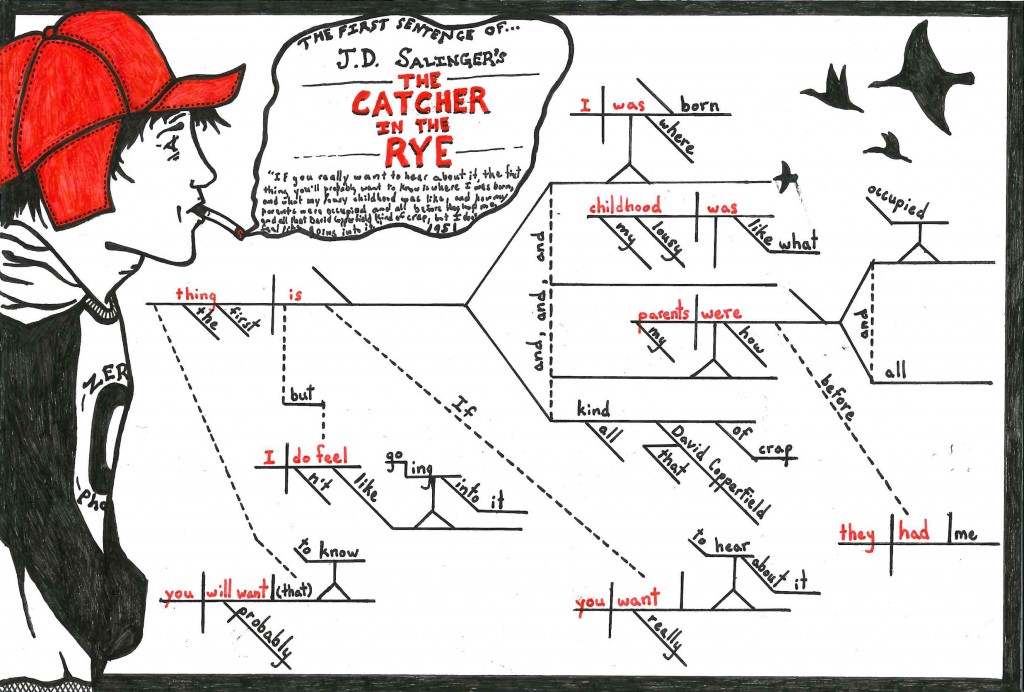 J. D. Salinger’s THE CATCHER IN THE RYE. 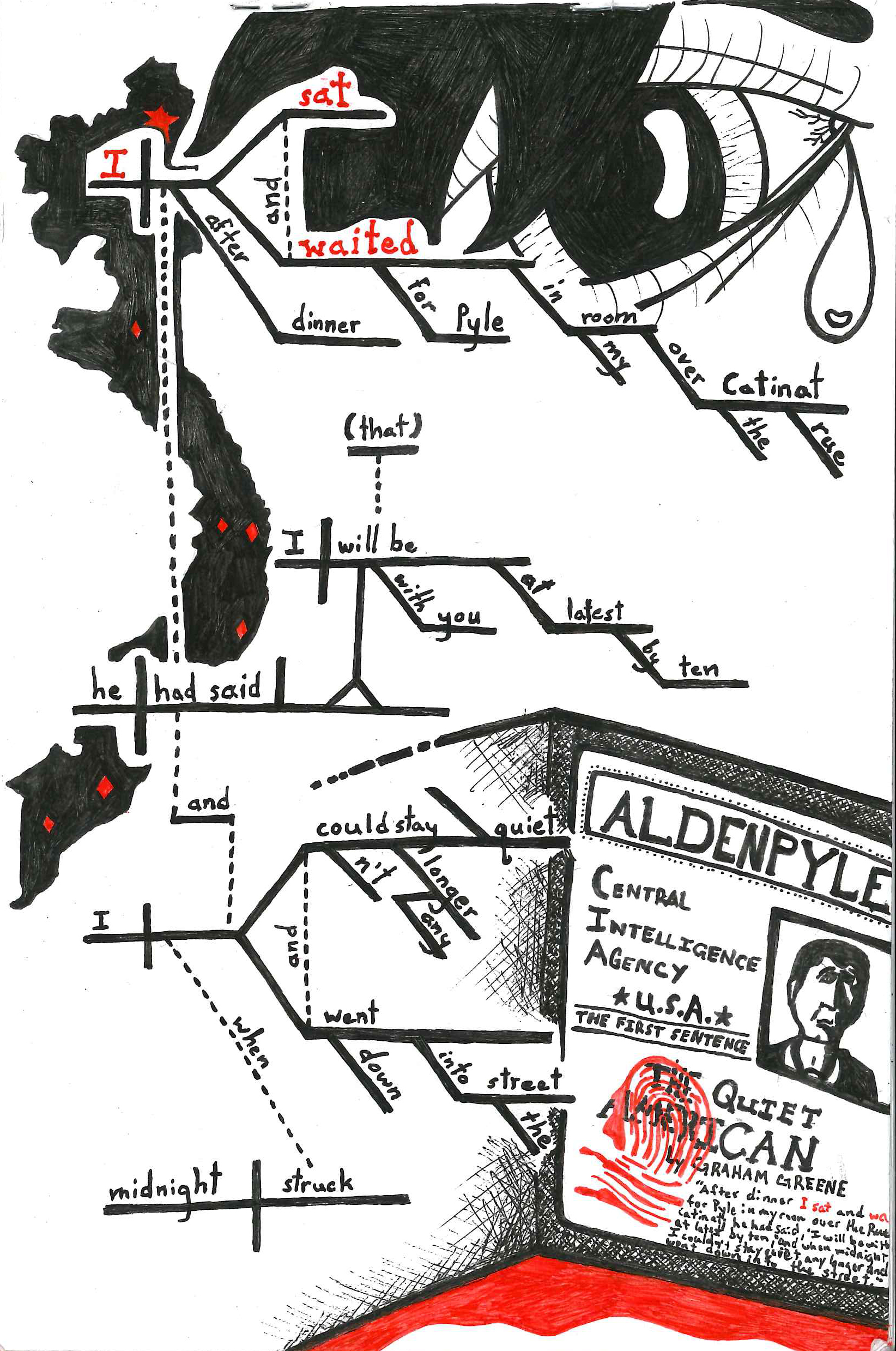 Whispers in the Hall

What does it all mean? What’s the purpose of the opening sentence? It’s certainly not the best sentence in the book. Why focus on it?

Literary purpose of an opening line

“What’s so great about this book? The boy’s a pussy and he takes the Lord’s name in vain over and over and over! Why would you study this crap?” 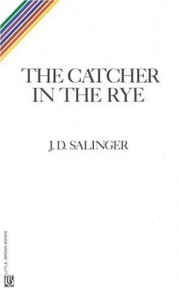 Salinger’s The Catcher in the Rye

In my junior year as an undergraduate, venerable American literature professor, Dr. Ron Black, assigned our class J. D. Salinger’s classic and controversial masterwork, The Catcher in the Rye. At the time, I was dating a beautiful and intellectually innocent redneck from the wild river town of Prairie Du Rocher, Illinois. One night, Catcher stumbled into her hands. As you might expect, she didn’t get it.

She was appalled at the language and she detested the main character. Having grown up around good old boys who were raised with a shotgun in one hand and a can of Budweiser in the other, Holden Caulfield was nothing more than a panty waist pussy who whined like a little girl and took the Lord’s name in vain far too much.

Defending my professor, I launched into my best attempt to parrot Dr. Black’s lectures. I explained the anti-hero concept and Salinger’s use of motif and his economy of language and how Holden’s voice was prescient of future generations of disillusioned youth. My grandiose stammering did little to impress her.

“What’s so great about that? The book is still full of terrible language and has a sissy for a hero. It ain’t great to me!”

I took this story back to Dr. Black and asked him how he would have responded in such a situation. What exactly is it that makes this book, or any book, a great work of literature? He sighed sympathetically, pursed his lips in thought, and said:

“You know what makes a book great to me? When I finish a great book, I mean, when it’s a really good book, I am immediately compelled to reread the first page.”

That didn’t mean much to my dear redneck girlfriend, but it stayed with me. Several years later, I reread Catcher. As I finished it, I could hardly wait to go back and reread the first page. It was a revelation. Everything was there in the first rambling, self-important, spoiled, bratty opening line – mood, tone, voice, foreshadowing, character. The opening line of Catcher is the perfect ending to a perfect beginning.