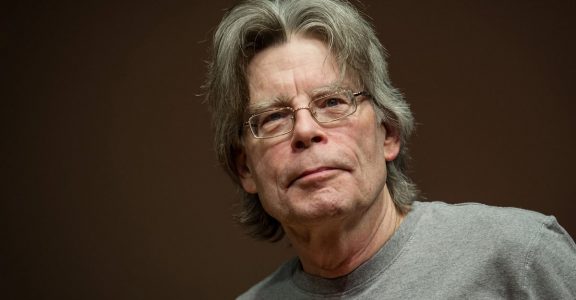 Classifying Stephen King as a horror writer is a misnomer. King’s gold is in his exposition of human trauma. It’s his pastiches of emotion and his unapologetic and oftentimes jocular stories of redemption that make him one of the most loved modern American writers. 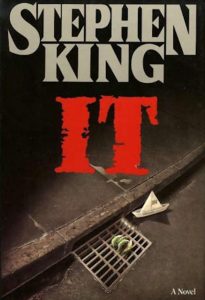 Gerald’s Game, Rita Hayworth and the Shawshank Redemption, The Body… even novels that are more easily classified as horror such as Carrie, The Shining, and It are not beloved because of their shock value as works of horror. They are beloved because the characters are almost perfectly developed for his audience.

King’s characters’ breakdowns are horrifying because we empathize; we care and identify with his characters.

We who love King aren’t reading him because we want to dye our hair black, listen to The Cure, and watch serial killer documentaries. We read him because he gives us hope that humans are more than the sum of our actions. He often devotes hundreds of pages to unfolding his characters’ emotional natures, and in so doing, he affirms that our emotional lives have meaning, deep meaning. His decriers call it bloat; we call it story telling.

Perhaps that’s why so many of us fell in love with King in middle school. Middle school is like the Olympics of emotional dysfunction, and from a horror perspective, well, I think we can all admit that we barely escaped with our souls in one piece; nobody gets out of Middle School unscarred. 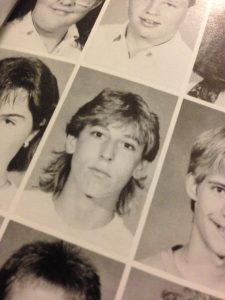 Middle School: No one gets out unscarred.

Discovering King as a middle schooler affirmed my own emotional sewage storm. The macabre images on the dust jackets drew me in, but it was the exposition that caught and kept my attention.

Adults weren’t three-dimensional when I was in middle school: they were either teachers, parents, coaches, cops, or neighbors…they were labels. If they had a secret emotional side, I was unaware. In contrast, the characters in King’s novels – adults and children – were not like that at all. They exhibited vast emotional landscapes, filled with problems, desires, secrets, and conflicts that affirmed my own internal rumblings and stumblings. 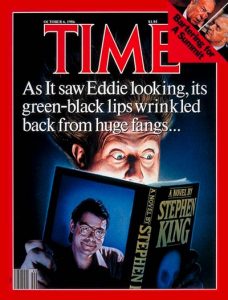 Stephen King’s It is a shining example of his ability to draw the reader in through the use of emotional exposition. The shifting timelines and multiple storylines connect the reader with their own innocence, maturity, jadedness, and hopefulness. It’s a messy business, and King does it with the deft agility of a world class conductor. He truly is unafraid.

The opening line of It is a doozy! King begins his first timeline with a diary entry, writing in the first person from the perspective of Mike Hanlon, the only member of the Losers’ Club to stick around Derry after the tragic events that occurred when they were children:

The terror that would not end for another 28 years, if it ever did, began so far as I can know or tell, with a boat made of a sheet of paper floating down a gutter swollen with rain. 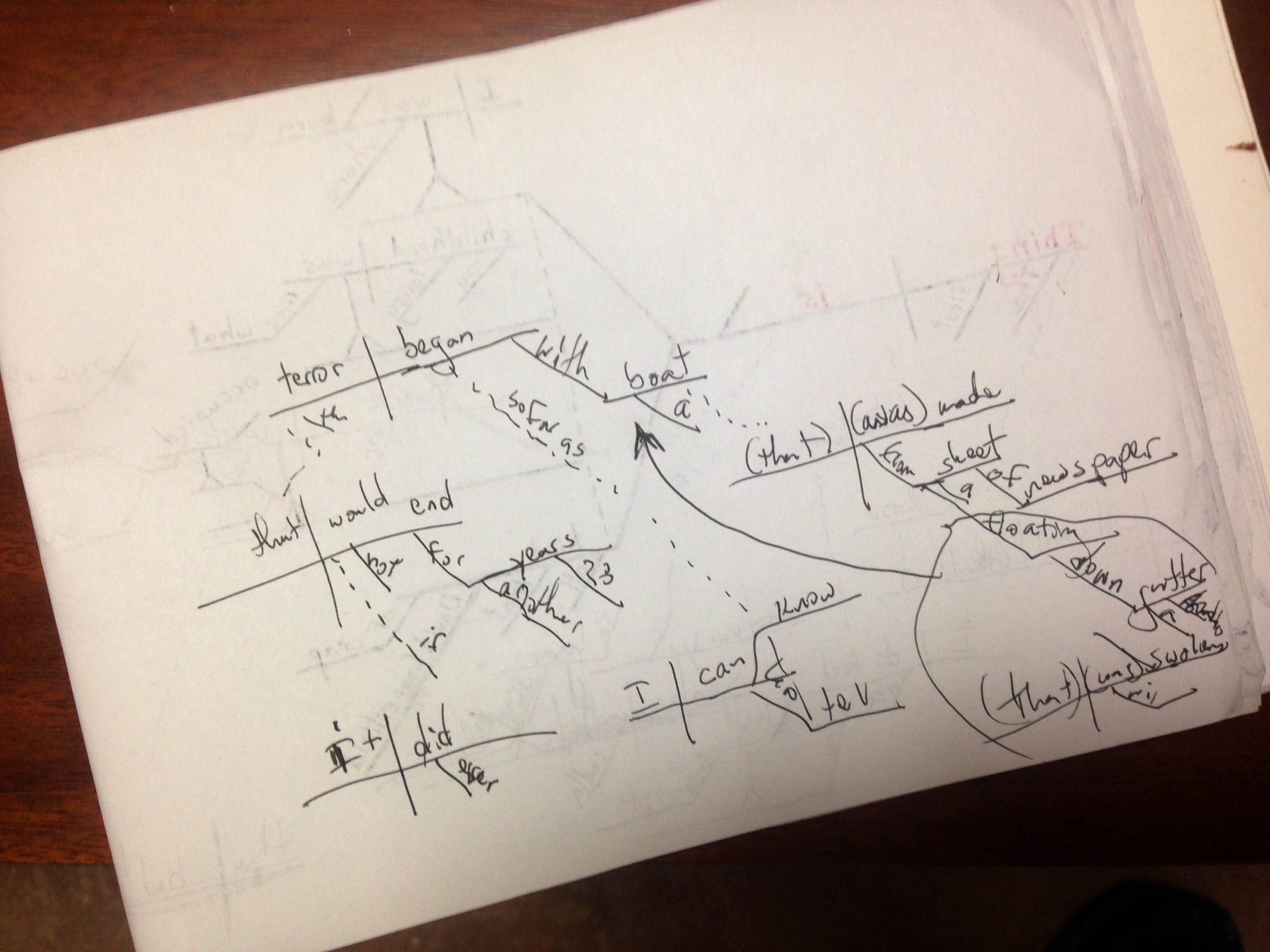 This goes there, that goes here, this might fit yonder…Think I got it!

That’s it! Everything else in the sentence is window dressing. The main clause is nothing more than “The terror began.”

King tags the subject with an adjective clause and throws an adverb clause in the predicate. Basic. Nothing fancy. But at the end of the sentence, it gets interesting. The end contains a long, trailing list of prepositional and adverbial phrases that form a bit of a drain pipe when diagrammed; they go down, down, down.

…with a boat
…made of a sheet of paper
…floating down a gutter
…swollen with rain. 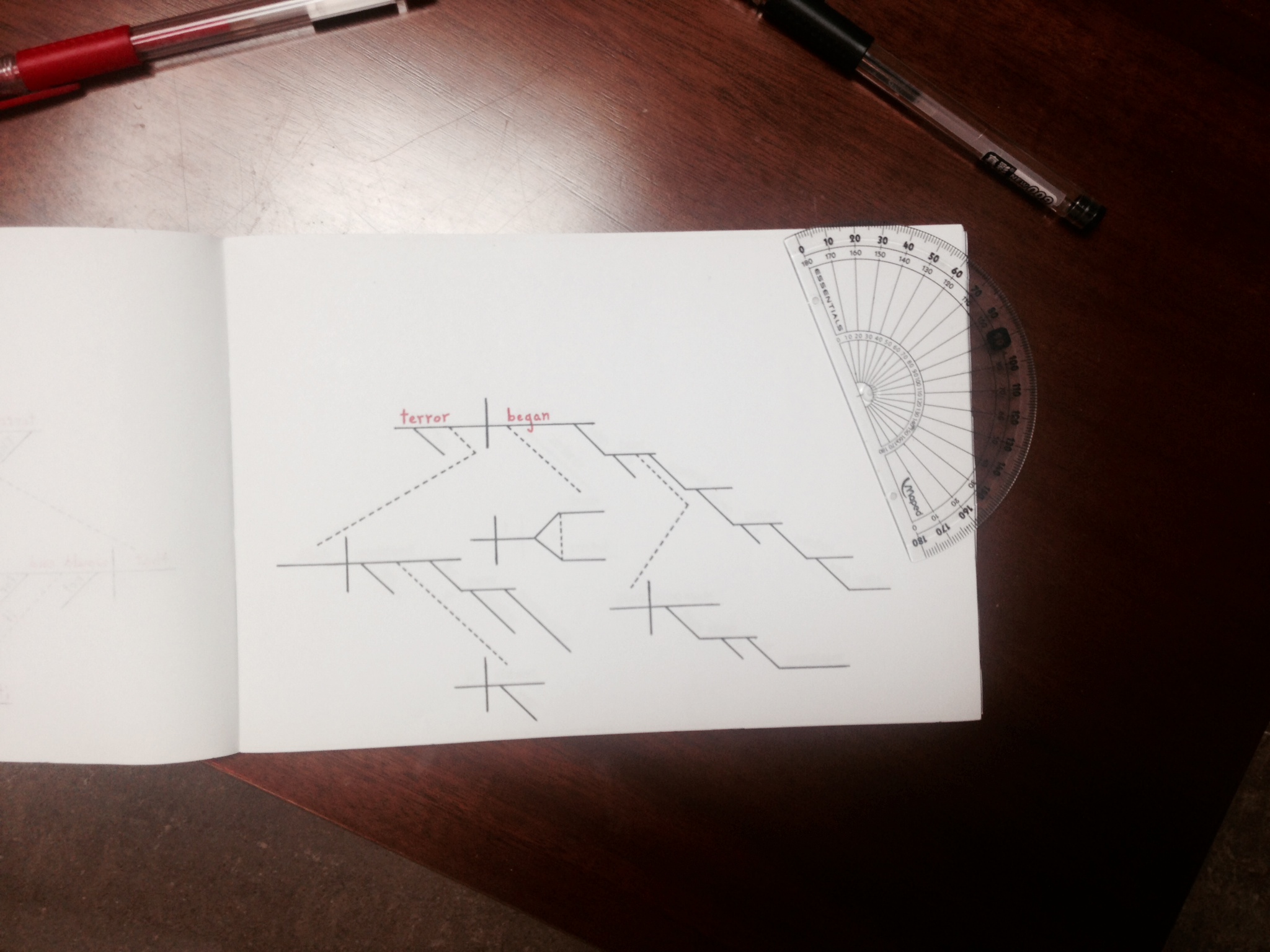 In the beginning, there was a frame… 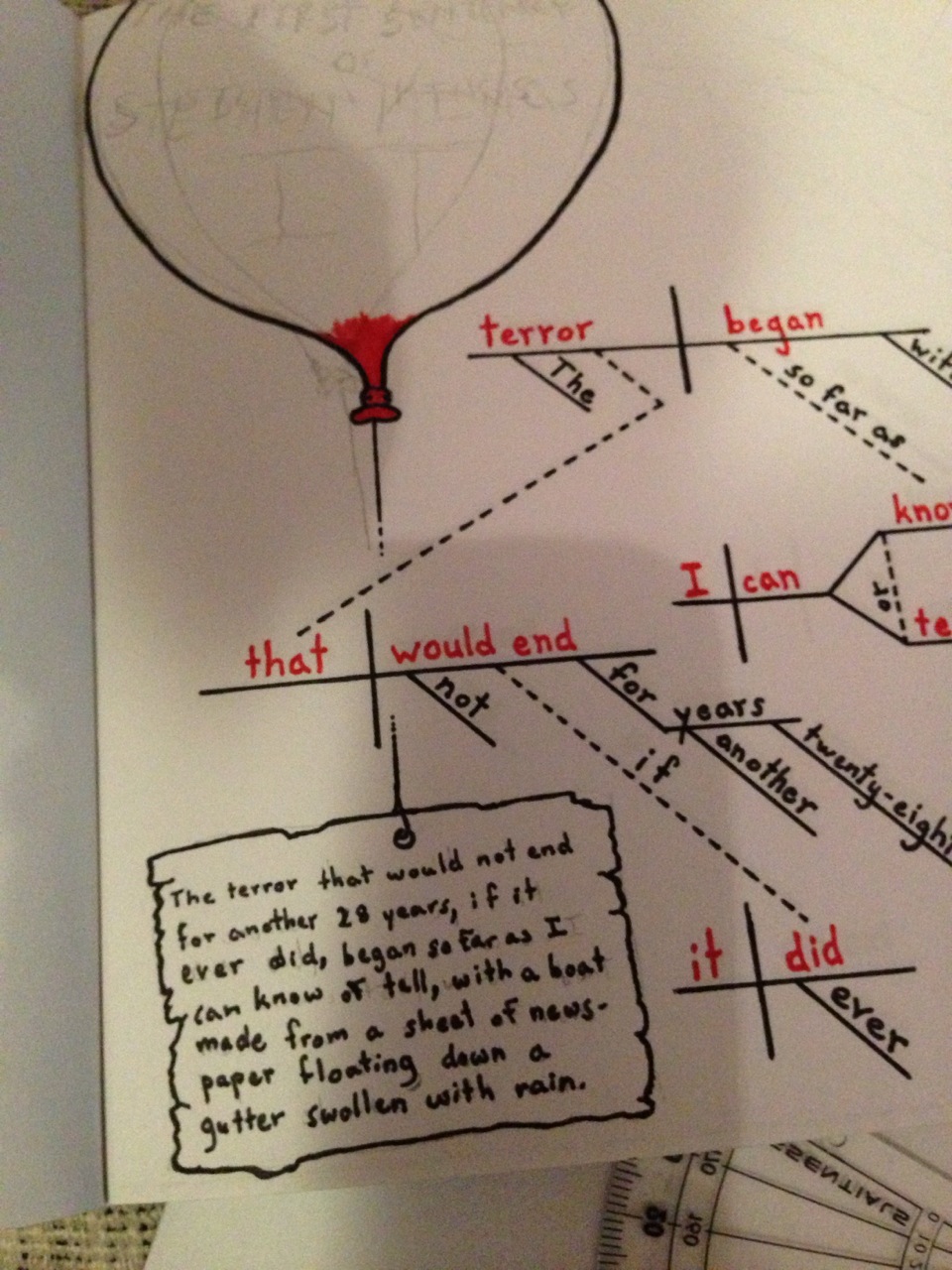 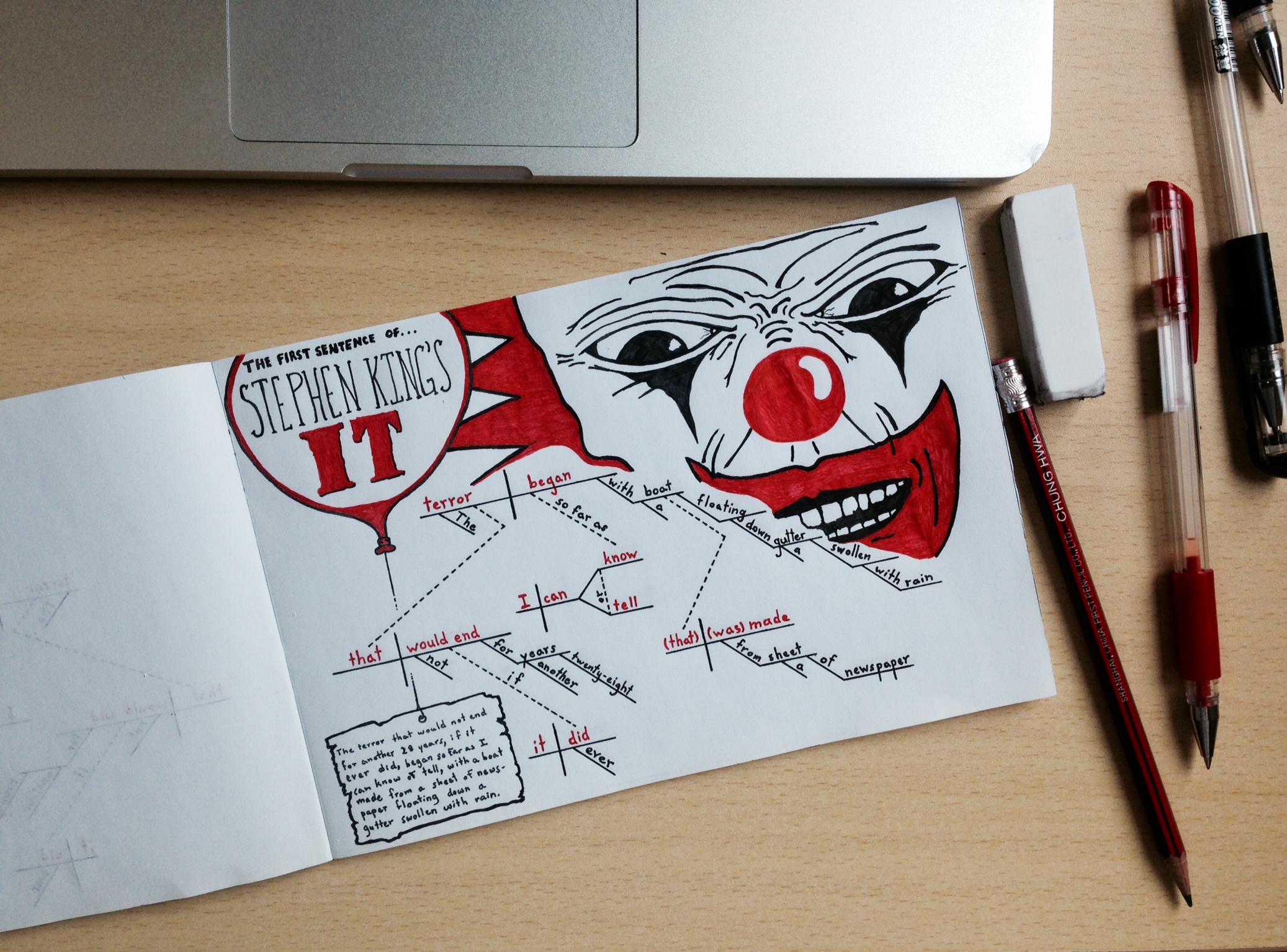 Drawing Pennywise was a blast! 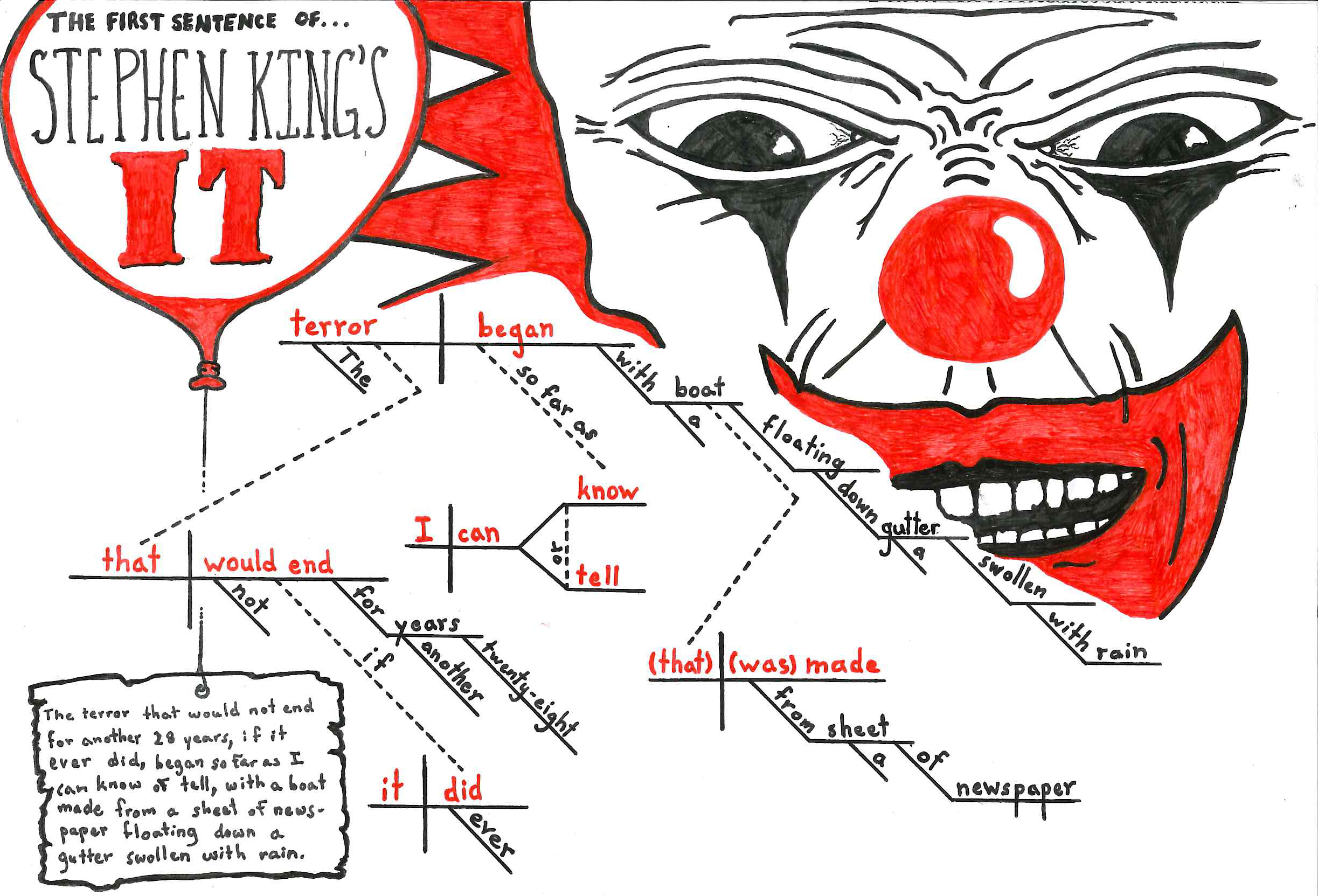