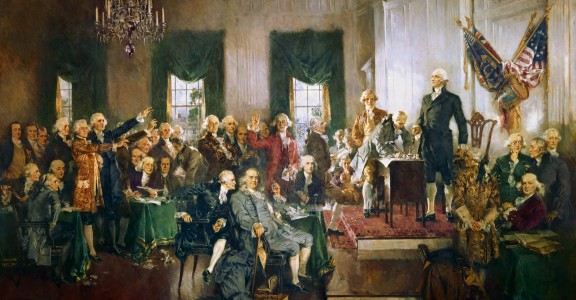 The job of a preamble is to set the stage for a document: it lays out the general scope and purpose of a work. In today’s language, we’d call it a mission statement. 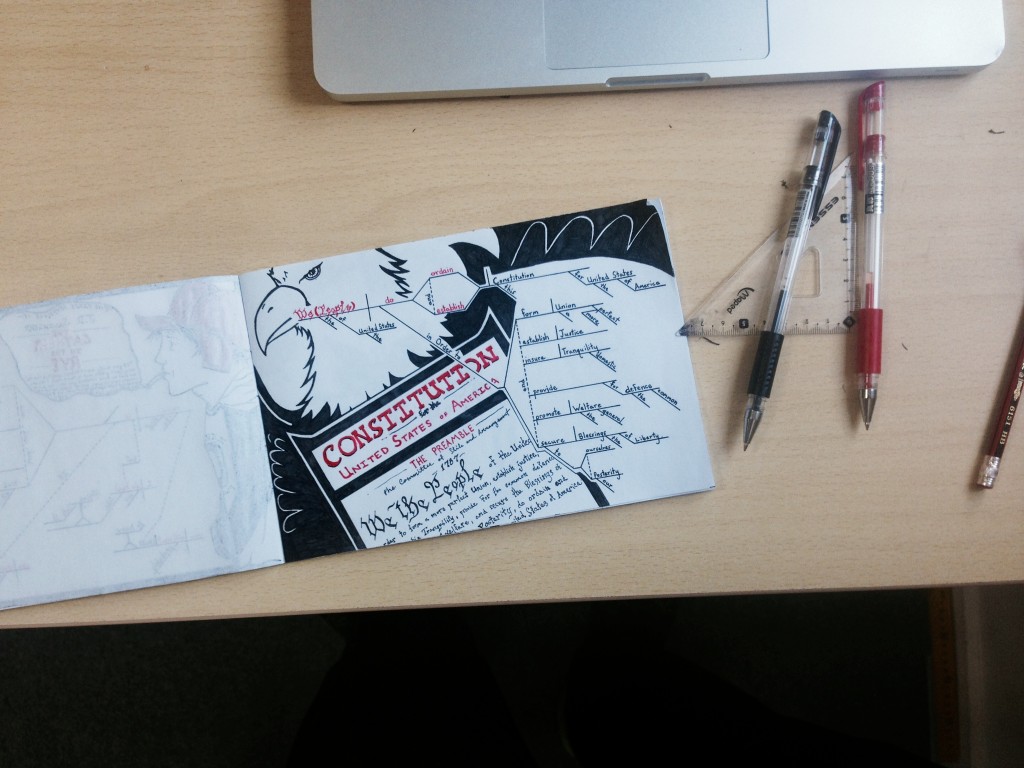 As a mission statement, I think the Preamble to the Constitution does very well. It conveys an immense amount of data in a highly economical fashion: it’s one big mutha of a grammatically correct sentence!

About the Language in the Preamble

According to Wikipedia, “the Preamble was placed in the Constitution during the last days of the Constitutional Convention by the Committee on Style [ed. What a great title for a committee!], which wrote its final draft.” This would put the writing of the Preamble around the fall of 1787. At this time, America was just beginning to develop a language of its own.

While we wouldn’t have fully developed and independent voices of writers and orators like Lincoln, Whitman, or Thoreau for another 100 years or so, by the late 1700s, our nation had been far enough removed from the Crown to develop some of its own style.

In the Preamble, we can see that our backwater, colonial forefathers had begun to toss aside the high British constricts of language that might have us dance around our point rather than go straight for the jugular. Niceties, shmicities! Our concrete, somewhat-naive, mush-mouthedness had already begun to flourish! Yankee doodle dandy, baby!

The full text of the Preamble is nothing more than one big ol’ sentence:

We the People of the United States, in Order to form a more perfect Union, establish Justice, insure domestic Tranquility, provide for the common defence, promote the general Welfare, and secure the Blessings of Liberty to ourselves and our Posterity, do ordain and establish this Constitution for the United States of America. 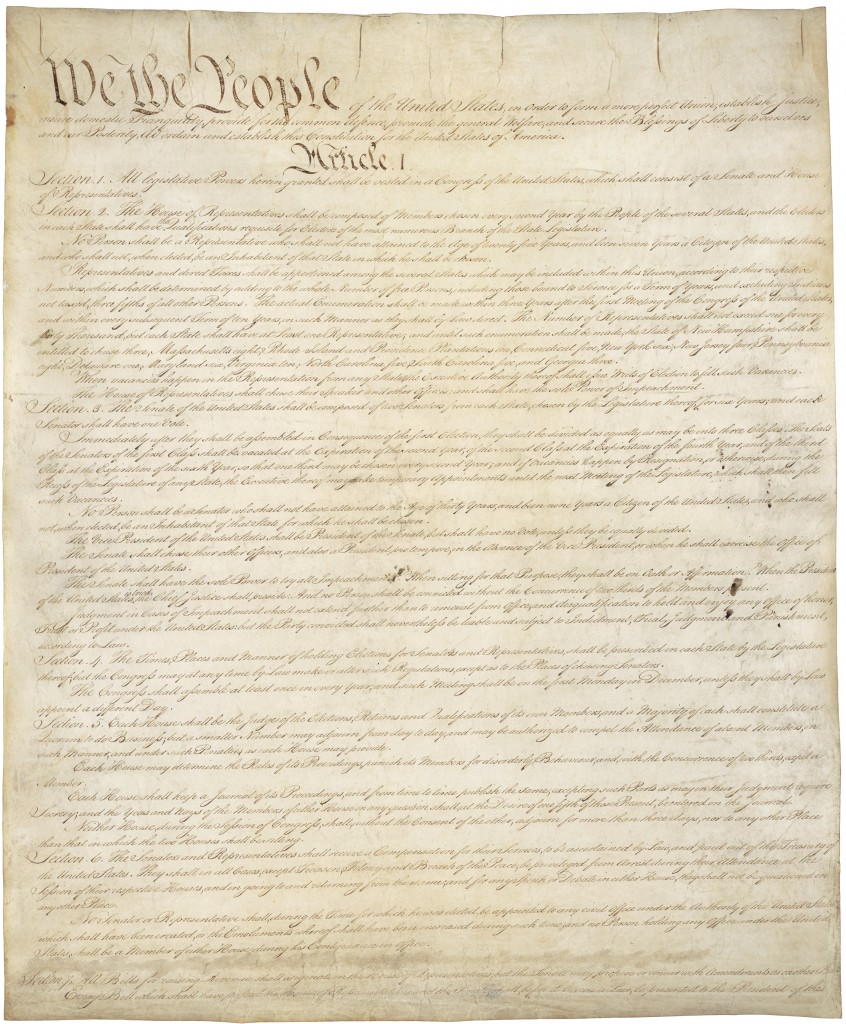 The first page of the Constitution of the United States of America. The Preamble is the sentence at the top above Article I.

Breaking Down the Elements

I struggled with one phrase in this sentence. Everything else was gravy. At its heart, the Preamble is a simple sentence: it’s one independent clause. 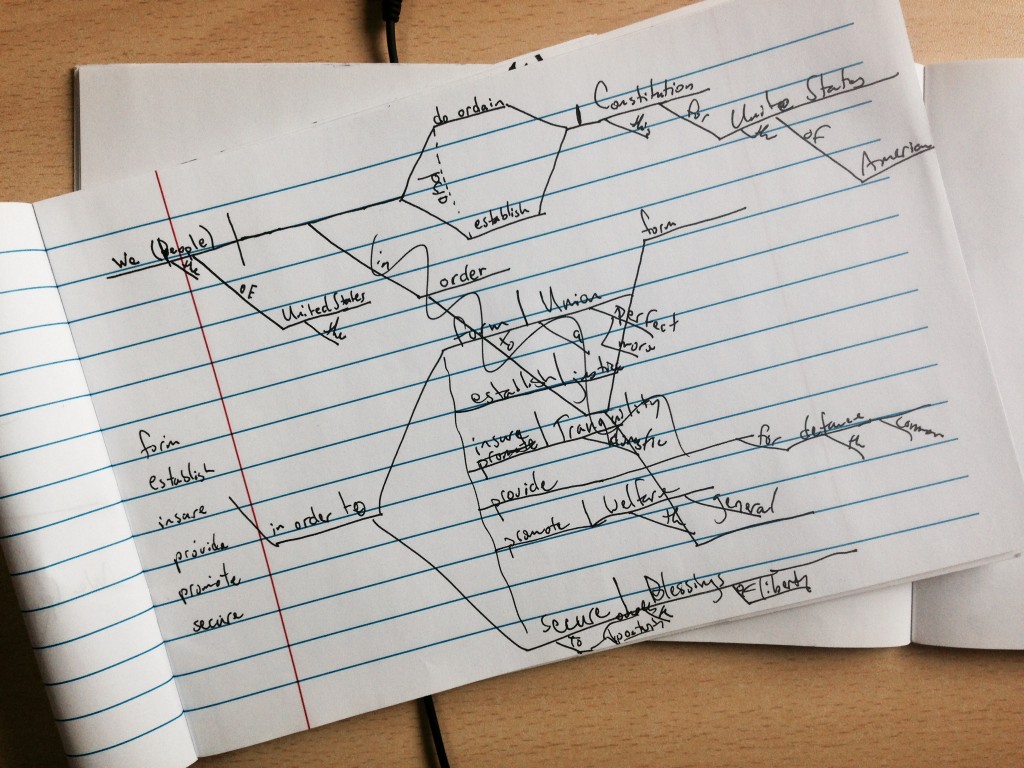 I am still somewhat shaky about the “in order to” phrase. In the draft, you can see that I struggled with it from the beginning.

Subject and Verb of the Clause

Let’s begin with the subject and verb of our clause:

We | do ordain and establish

Boom. That’s it. We are ordainin’ and establishin’ a constitution! Whatcha gonna do about it King George?

Appositive Phrase in the Subject

Our subject has an appositive phrase, which is a phrase or word that renames a noun (example: Jack’s dog, Rex – “Rex” would be an appositive). In this case, our appositive phrase is: the People of these United States. Today, this phrase is well known and accepted – it’s kind of a part of our emotional fabric: We are the people! Power to us! Ironically, it wasn’t always there!

The back story to how and why the appositive phrase was added reveals that it was more of a legal CYA (cover your …) for future issues than a rallying cry for the masses (see this section of the Wikipedia article for a bit more). 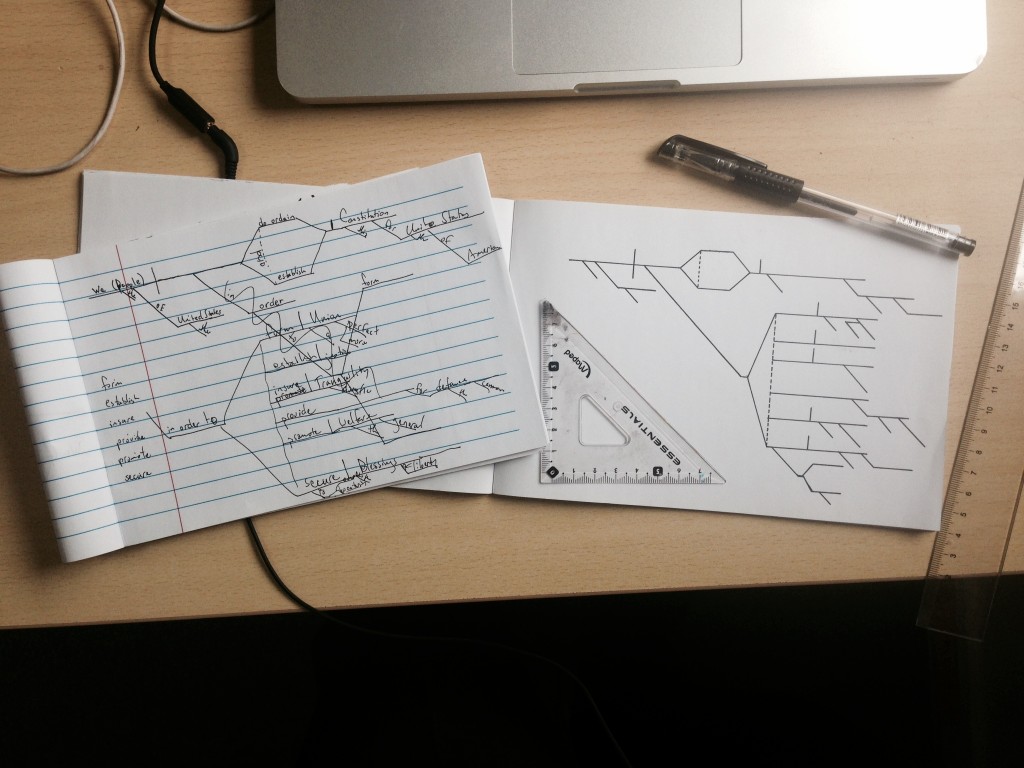 My first attempt at framing out this beast. Unfortunately, I made a mistake and had to redo the whole thing – twice 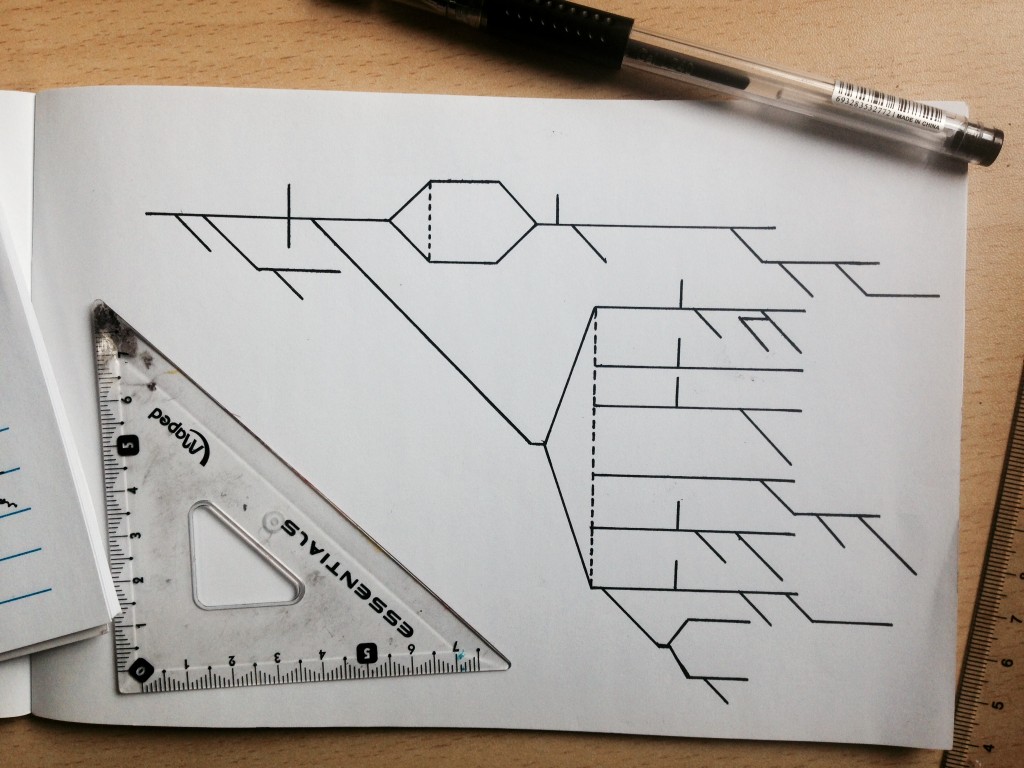 A closer look at the finished frame 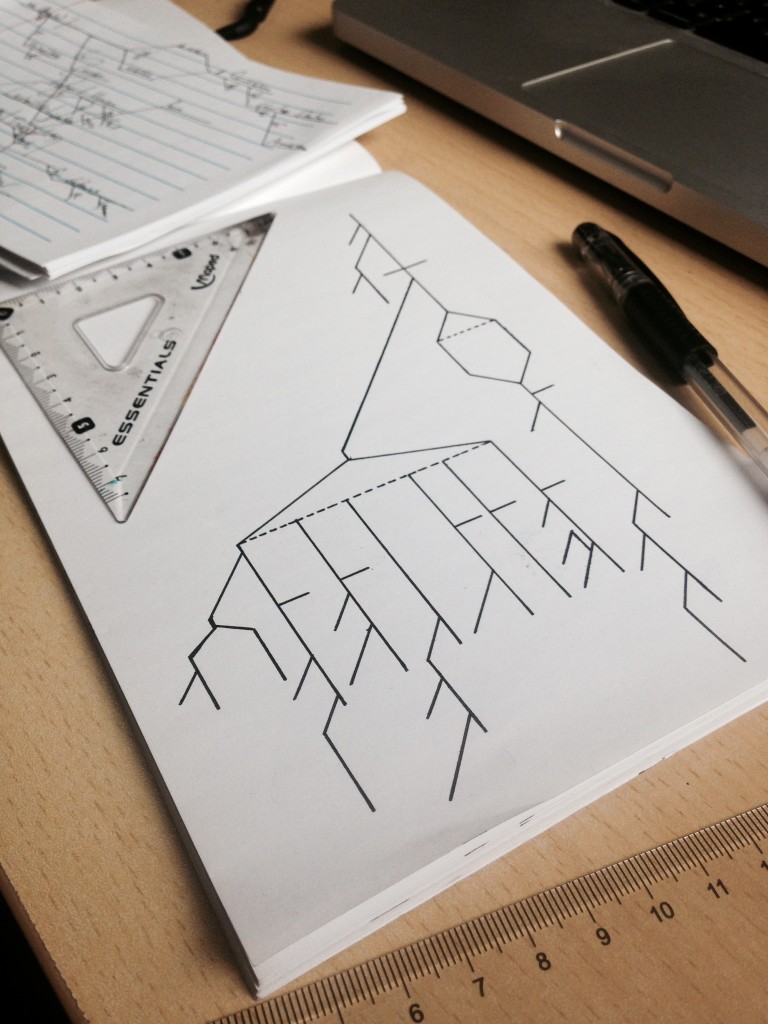 Now, all I have to do is spell the words correctly – which can be a challenge sometimes because we all make mistakes, and I don’t use erasable pens!

That’s really all there is to this sentence. Oh yeah, there is that pesky infinitive phrase in the middle that explains why we’re creating this constitution. It’s a monster, so hold on!

Here is the offending phrase (which I believe is an infinitive phrase):

…in Order to form a more perfect Union, establish Justice, insure domestic Tranquility, provide for the common defence, promote the general Welfare, and secure the Blessings of Liberty to ourselves and our Posterity

To form, establish, insure, provide, promote, and secure, we are creatin’ this here constitution! Booya, Britian!

Each verb phrase is giving us a direct object except for number four, which is just a subject/verb construction with the prepositional phrase, for the common defence, tacked on to modify the verb, provide. 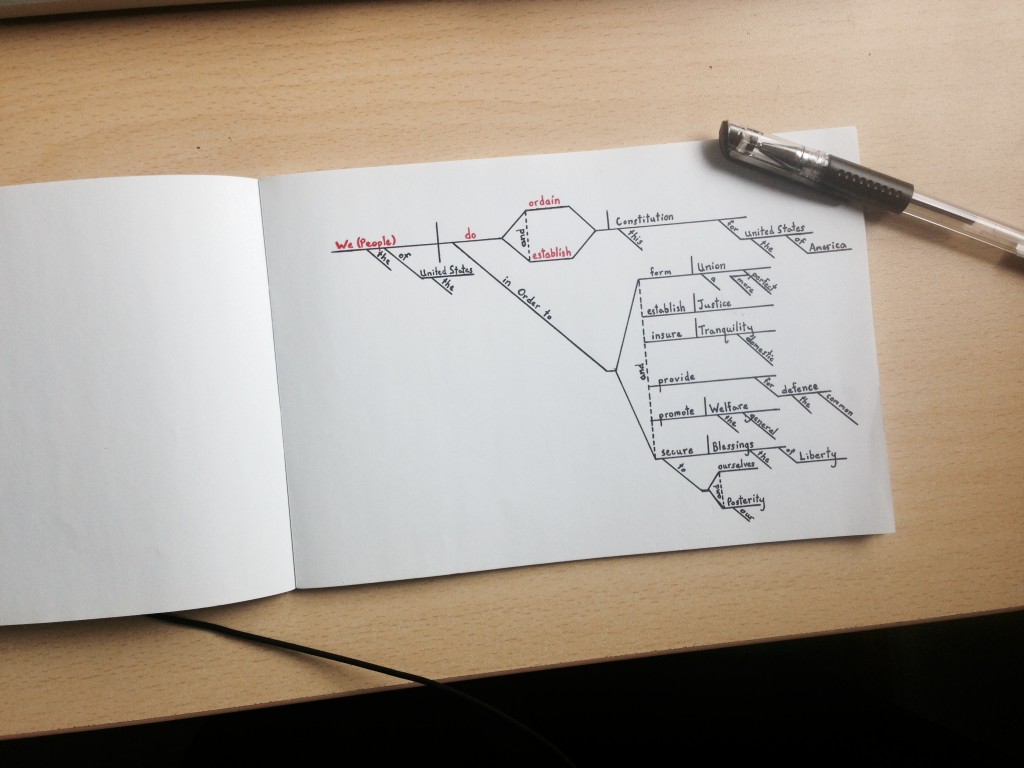 This was one of the most frustrating pieces that I’ve ever done! I am not an artist (obviously), but I do think that I can squeak out some cool doodles from time to time. Unfortunately, I kept messing up the drawing on this one. In total, I think I redrew this entire piece three times! I easily have an entire day in this piece. Crazy! 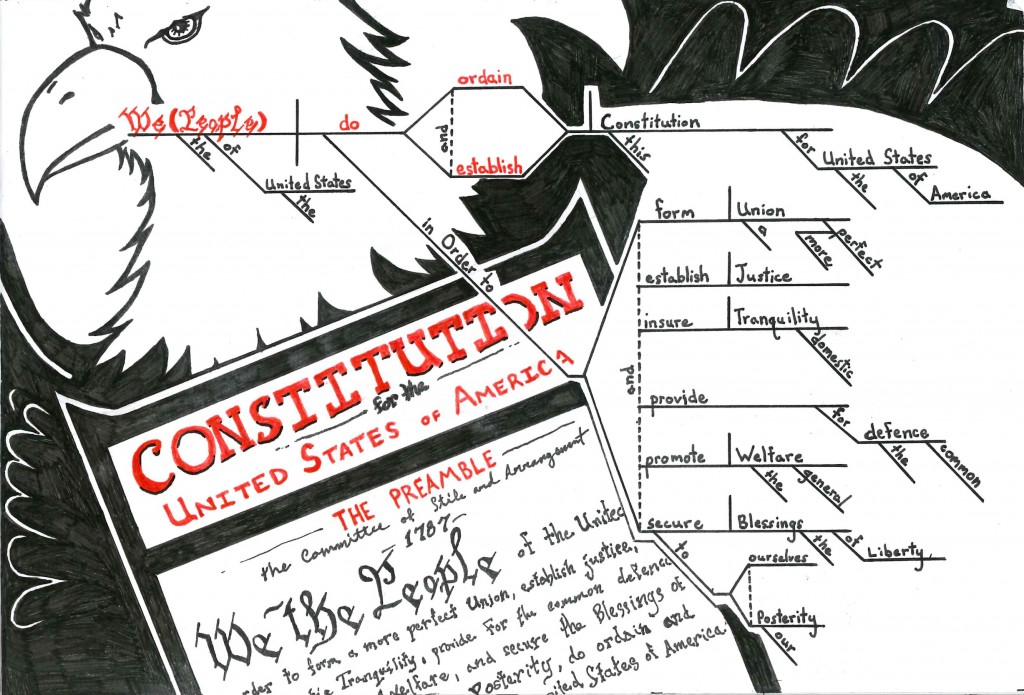 My last, best effort at adding artwork to this diagram

A Call to Grammarians

Anyone who would like to argue with my grammatical choices in this sentence, please feel free to leave a comment below. I totally welcome your critique. I’m not 100% on this one. Your help would be greatly appreciated!