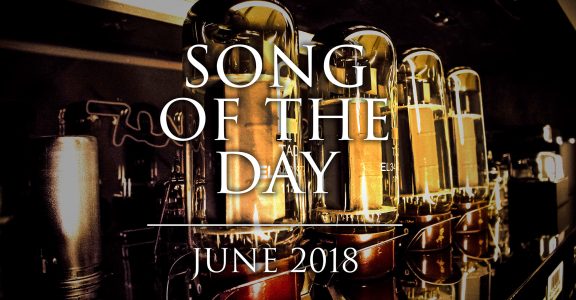 For years, I’ve spent my mornings whistling, humming, or mumble-singing some of the most random songs.

From Broadway’s “Hello, Dolly!” to Slayer’s “Dead Skin Mask,” these auditory passengers seem to have no reason nor rhyme. This blog topic is my attempt to make sense of them.

I am not sure why this melodic piece bubbled into my conscience, but I’m glad it did. What a beautiful piece!

Heading out for a 5:30 a.m., 65 mile bike ride. “Good morning, America! How are you?” He might be a draft-dodging hippy, but you can’t argue with a handful of his tunes.

I don’t know why this song came in my mind. All I could remember was the refrain, “I know it was wrong when I said it was true that couldn’t be me and be her inbetweeen without you.”

Because I’m still a Toys R Us kid? I have no idea. Not a terrible song to have stuck in your head on a Monday! 🙂

I was never a Van Hagar guy in high school (that was reserved for the soccer playing, mini-truck driving, short mullet-wearing semi-jocks). Great song (and video!) for my second day as a full-time employee at Centene.

“Stab! March!” Maybe this new job is getting the best of me? Need some meditation and prayer. LOL.

God bless Maggie, who gave me Gillian. This song is in my head so often, it deserves a permanent place on the blog.

“The Boys Are Back in Town”

My band does a lounge/rock version of this song. Perhaps I was missing our practice sessions?

I have a lot of early Joel in my noodle. It crawls out quite a bit. This one is a shaker!

“You Can Get It If You Really Want It”

Great song. Not sure how or why it ended up in my head. Glad it was there this morning! 🙂

There was a time when my old band would have given a testicle to open for Slobberbone. I think this one came back to me because NPR played a snippet of a Tupelo song.

Mike Campbell is a beast. Great song to have stuck in your craw!

“Dream a Little Dream of Me”

According to Wikipedia, this song’s been recorded by more than 60 artists! Quite the testement. The reason it was in my head was because I wanted to go back to bed!

Wow. Were the 80s this vaccuous? The lyric that bubbled up in my craw this morning was “One down, one to go…” I was thinking about my morning routines.

Check out that badazz synthesizer! Local guitar hero, Jimmy Griffin, plays in incredible acoustic version of this song. It was on my mind.

My co-worker, Brian, gave me a Traveling Wilburys documentary. Now, I have this lovely song in my head and really want a twelve string Danelectro.

Our drummer likes to sing this one. We typically begin our set with it. Man, Cream sounds so much better than my band!

Toots & and The Maytals

What came into my head this morning was just the lyric, “Pressure Drop.” I’m so glad to hear the whole song. It’s been a long, long time.

“Please don’t dominate the rap, jack…”  I’m pretty sure that I was thinking about a meeting when that line came into my noodle. LOL. I guess it was good enough to stick around until this morning.

Yup, they’re rock’s favorite douches, but it’s hard to deny this song, man. It accidentally came on when I was hooking up my new Jabra bluetooth earbuds. Apparently, my ex-wife downloaded this album years ago to our iTunes account, and apparently, it was up on my playlist. Happy accident.

I never got Michael Stipe’s anxiety-ridden emo-rock style. It always made me feel nervous. I have no idea how this ear worm took hold today.

Love this album. Rode my bike past a pawn shop on Dr. Martin Luther King this morning. Started singing this song in my head.

“You’ve been drinking my blook while I’ve been licking your wounds…” Spooky stuff to have in your head first thing in the morning. This song gets heavy about a quarter way through. Worth sticking around for.

I love me some Rufus. Listened to a bunch a few days ago on a bike ride. Why this one stuck is beyond me. Totally not my favorite, but that chorus! Yummy.

If you know me, you know that I have a penchant for watching crime documentaries. Sociopaths and psychopaths fascinate me. I’ve recently gone down an ID Discovery YouTube wormhole, and this morning, it hit me how macabre it would be to juxtapose this song with a murder spree documentary. I probably should talk to my therapist about this!

I woke up grooving on the verse lyrics: I would climb any mountain / Swim across an endless sea-e. Not a bad song. I mean, of course it’s not a bad song. Rather, it has a redemptive quality that is kind of hard to find in some late 70s rockers.

“Lonesome on the trail!” I think I watched a trailer for a gay cowboy movie on YouTube and this song somehow got stuck in my craw.