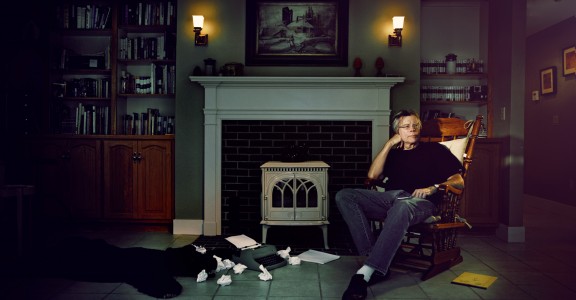 The Walking Dude – worn-down boot heels, denim jacket, and, of all things, a lapel button that reads “How’s Your Pork?” – makes his way across a desert wasteland, gathering all acolytes who are willing to bend a knee to him.

This is quintessential King. For nearly 40 years, King has deftly created worlds that are capable of walking a tightrope of absurdity and horror. Few writers are able to take on mammoth themes, such as Armageddon, and have fun with it!

I grew-up on King. I became an English major because of King. King was my respite and sanctuary; he was my opiate escape in junior high school.

And I think, junior high school was the last time that I read any of his work.

Then, while moving some books, I came across an old, hardback copy of The Stand. Would it still work? I had to know. 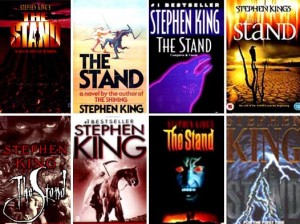 Stephen King’s THE STAND: Still scary after all these years.

Of all his crazy nightmarish characters and themes, The Stand was the most terrifying to me. As its characters moved across a post-apocolyptic America, pitted against their own sense of righteousness versus ambition, I felt my own moral compass being called into question: whose side would I have been on?

Three quarters of the way through this massive tome, I found myself looking over my shoulder when I heard strange noises. I had to consciously tell myself that random coincidences were not necessarily acts of God or the devil: I wasn’t necessarily an agent or puppet of either side. But alas, alack…I was a like a boy whistling in the dark. King had me. Even as an adult, he had me.

It is very true that King’s writing is sometimes silly, sometimes perverse, and sometimes just off the mark. Here’s the rub: He doesn’t seem to care! We have to admire him though for that. King really is unafraid.

Stephen King has churned out something like 30 novels – and for what they are, most of them are quite redeeming. The English major in me wants to dissect the novels and show their lack of care for language – the man really does seem to dole out words like a spendthrift with dollars. But why? What’s the purpose?

King has a place on my shelf and I’m proud to put him there. Maybe like some older generation Y’ers might feel about J.K. Rowling. King aint Yeats, but I sure loved him, and I still do apparently.

I’m very happy to have re-read The Stand after so many years. It’s still a good book with well formed characters, brilliant premises, and a cataclysmic ending that rivals anything else in its genre. Thank you, Mr. King.